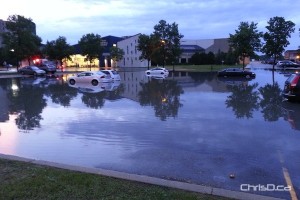 Environment Canada issued a severe thunderstorm watch late this afternoon — later upgrading it to a thunderstorm warning. The weather forecaster said flash flooding may be possible — and it was.

Shoppers in south Winnipeg reported flooded parking lots around Cabela’s and IKEA on Sterling Lyon Parkway. Photos and video on Twitter showed a geyser-like sprout of water shooting up from the ground floor of the IKEA marketplace. A video (above) was posted showing shoppers evacuating the store and walking through about an inch of water in the lobby.

The intersection of Waverley Street and Taylor Avenue was also flooded, as motorists slowly treaded through trying not to stall. Water filled the underpass north of Sterling Lyon Parkway just before Taylor Avenue. A similar scene was reported at the underpass at Pembina Highway and Jubilee Avenue.

Over in Charleswood, residents said their ditches were overflowing as the storm drains couldn’t keep up with the steady stream of rain, which tapered off around 8:30 p.m.

Rumor’s Comedy Club on Corydon Avenue also took on water. The laugh shack has been prone to flooding in the past due to its basement location.

By 9:20 p.m., the thunderstorm warning had ended for Winnipeg and Headingley.

← Previous: More Seats Released for Bombers' Home Opener Next: Residential Schools Research Centre to Be at U of M →
Tags: IKEA | Weather