Charles Roberts to Be Inducted into Blue Bomber Hall of Fame 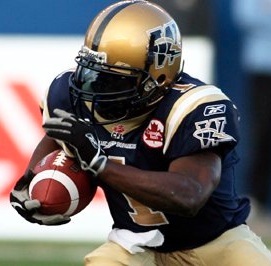 The Winnipeg Blue Bombers are inducting former running back Charles Roberts into the Blue Bomber Hall of Fame.

Along with Roberts, past president George Graham and media friend Ralph Warrington will be inducted during the Football Club’s annual Legacy Dinner on September 18.

“What an incredible evening this is shaping up to be as we get set to honour three very worthy men and induct them into our Hall of Fame,” said Winnipeg Football Club president and CEO Garth Buchko. “All three of these men made many contributions to our organization, whether it be on the field or off, and we look forward to honouring their past accomplishments.”

Roberts began his CFL career with Winnipeg in 2001 and ran for 10,285 career rushing yards, which currently ranks in fifth place in CFL history. Roberts led the league in rushing three times (2003, 2005, 2006) and is the franchise’s leading rusher with 9,987 yards and 64 rushing touchdowns.