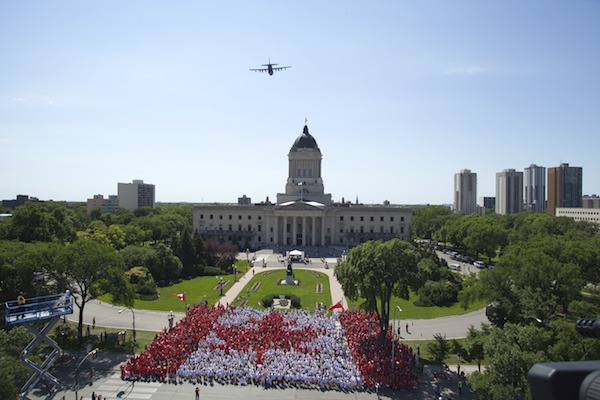 The BIZ has put the call out for volunteers to assemble next Monday in red and white T-shirts on the grounds of the Manitoba legislature. The challenge has also been put out to three other cities with a goal of creating a similar-sized human flag.

“With more than 700,000 residents in Winnipeg, let’s show Calgary, Ottawa, and Victoria, that we’re the city to beat,” said BIZ executive director Stefano Grande. “What better way to show our civic pride and love for our city than to participate in this event?”

Those wishing to participate are encouraged to sign-up online. T-shirts will be given out on a first-come, first-served basic beginning at 9:30 a.m. on the 1st. The formation of the flag and photo-op is planned for between 11:15 a.m. and noon. Walk-ups are also welcome to join the flag.

While the BIZ has ordered 2,000 T-shirts, people are encouraged to wear their own red and white to accommodate everyone who wants to be part of the photograph.