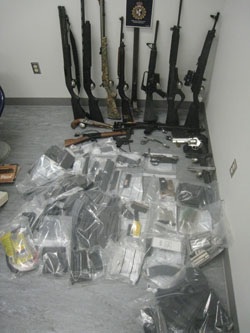 Border agents at the Emerson, Manitoba crossing have seized 16 firearms, along with weapons and other prohibited devices.

The Canada Border Services Agency says two U.S. residents attempted to cross into Canada on Wednesday with their vehicle and trailer. The driver declared he had 10 long guns and a secondary search was carried out.

Christopher Doyle Sanders, of Oklahoma, was arrested on the spot. He faces six charges under the Customs Act and additional charges are pending. He remains in custody pending a court appearance in Winnipeg.