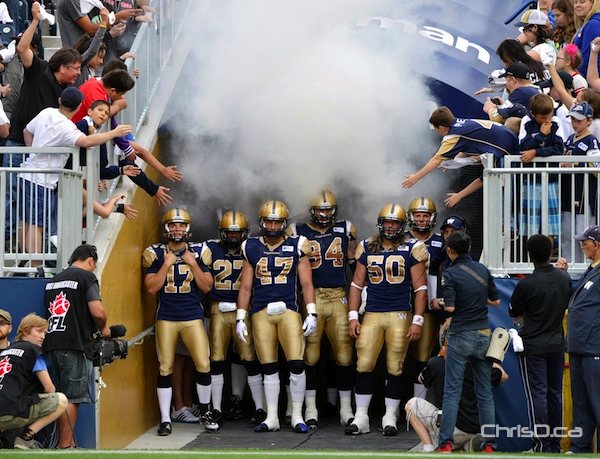 WINNIPEG — The Winnipeg Blue Bombers gave the sell-out crowd of 33,500 for the opening of Investors Group Field quite a wild ride Thursday night as the 2013 season kicked off at the brand new crown jewel stadium of the CFL.

“You can’t have three turnovers right off the bat and do very well in a game,” said Winnipeg head coach Tim Burke after his club’s 38-33 loss to the Montreal Alouettes. “I think if you take away the turnovers, obviously two of those lead to touchdowns on short fields, and we’re talking about a totally different ball game.”

Less than five minutes after the first ever opening kickoff at the Blue and Gold’s new digs, they trailed the Als 14-0, and the game — as well as the capacity crowd — were thought to be lost early.

But a Demond Washington interception and return all the way to the Montreal five yard line set up a Chris Matthews TD-grab to bring the home team back to with striking distance.

They were fortunate to only be down 23-13. By halftime, Winnipeg had committed three turnovers and only mustered 104 yards of offence to Montreal’s 209.

And then the Blue Bombers exploded, outscoring the Als 20-1 in the third quarter as quarterback Buck Pierce went 7-of-7 for 147 yards and a touchdown to Clarence Denmark set up by a 65-yard catch-and-run by receiver Jade Etienne in his first career CFL start.

“It was definitely nice to just get out there and play,” said Etienne of his three-catch, 79-yard outing. “It’s out of the way now so I can just come out and focus on other things and not my first start.”

Following a quick two-and-out by Montreal after Denmark’s touchdown, Winnipeg’s  Washington made his mark again, returning a punt 80 yards to the house to give Winnipeg its first lead of the game, 27-23.

“I’d rather have the win than the punt return any day,” said Washington. “It was great, but unfortunately we didn’t come out with the win. I’m disappointed more about that.”

Bombers kicker Justin Palardy, who was perfect on Thursday, booted his fifth try of the game to put his team up 33-24 late in the third.

Then Montreal came roaring back.

An S.J. Green touchdown on a broken play, followed by a pair of Sean Whyte field goals put the Alouettes up for good.

Winnipeg has a chance for instant redemption in Week 2 as they travel to Montreal for a rematch.

“We know who they are now,” said Winnipeg linebacker Henoc Muamba. “And we know who we are as well. It’s just a matter of being consistent, practicing and staying consistent in our game plan.”

View the photo gallery from the home opener below.