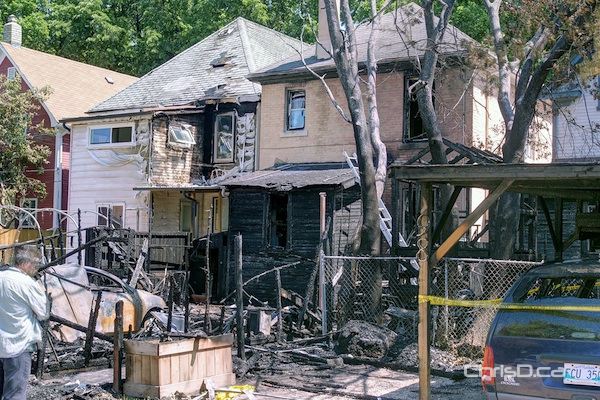 A marijuana grow-op was discovered in a home after a garage fire in the 500 block of Home Street on Saturday, June 29, 2013. (STAN MILOSEVIC / CHRISD.CA)

A garage fire on Saturday morning eventually led to the discovery of a marijuana grow-op.

Winnipeg firefighters were called to the 500 block of Home Street for a fire in a detached garage around 6 a.m. Flames spread to the house and to the homes on both sides.

The fire was extinguished and no one was injured.

Police discovered a marijuana grow-op in one of the houses and executed a search warrant.

No arrests have been made and police continue to investigate.

← Previous: 'Ballet in the Park' Returning on July 24 Next: 'Red River Cup' Bringing Out Best in U-16 Football →
Tags: Drugs | Fire | Marijuana