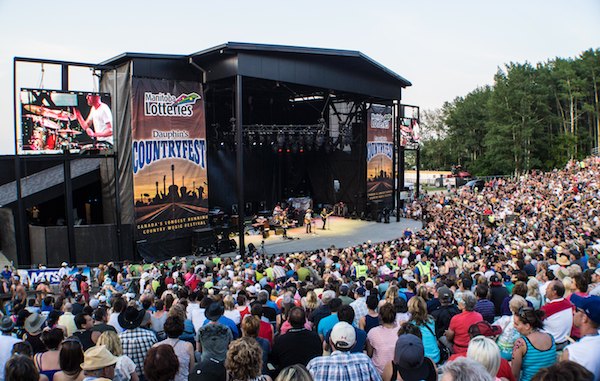 Dauphin’s Countryfest is in the books for another year. (TODD PEDERSON PHOTO)

The Canada Day long weekend wrapped up with Dauphin’s Countryfest, as the annual festival celebrated its 24th year.

Organizers say this year’s festival was the most successful one so far, with 14,000 ticket holders and 1,000 volunteers. Weekend passes sold out in a record 12 hours back in November.

“Who’d have thought a little Manitoba town like Dauphin, with a population of 9,000 people and located 200 miles from a major city, could carve an amphitheatre out of a hillside and turn it into one of the best country music festivals in North America,” said Eric Irwin, president of Dauphin’s Countryfest, who also happens to be the mayor of Dauphin.

Besides the usual traffic hiccups with concert-goers arriving at roughly the same time, organizers say the event only saw minimal trouble.

“Given the amount of people who show up at a festival in such a short period of time, and the fact that festival goers like to kick back and enjoy themselves, there’s going to be issues. Countryfest is no exception to any other concert,” Irwin added.

RCMP reported on Monday that within the last 24 hours they responded to two disturbances at the site, six assaults, two mischief calls and removed five people for being intoxicated.

Traffic enforcement in the area resulted in at least 45 tickets being issued for speeding, five for failing to wear a seatbelt, three for unauthorized possession of liquor, and 15 for other traffic offences.

The party will continue in Dauphin in 2014, with Blake Shelton confirmed to headline the Manitoba Lotteries Main Stage on Saturday night.