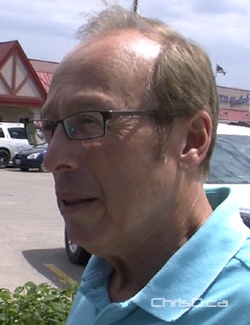 Mayor Sam Katz was a familiar face in a crowd who spoke up over the province’s PST increase on Tuesday night.

Katz addressed a legislative standing committee, where he called on the NDP government to fund the municipal infrastructure crisis.

“Public infrastructure is fundamental to our prosperity and our quality of life,” Katz said to the committee, who is in the middle of holding public hearings on the PST increase.

“A stable, ongoing source of funding would allow municipalities to set priorities, plan ahead, and reduce costs by acting strategically. If you, as legislators, don’t take steps to solve Manitoba’s infrastructure crisis — not on a piecemeal basis, but in a comprehensive, strategic fashion — then it’s all Manitobans who will pay the price.”

The PST increased one percent on July 1 to 8% as outlined in the government’s 2013 provincial budget in April.

Mayor Katz urged legislators to ensure transparency when distributing the millions of dollars collected from the increase, which they say will fund future flood mitigation in the province.

About 29 people spoke on Tuesday and will continue to do so this week. Public hearings must be held before the government can pass Bill 20, which would make the PST increase law. The Progressive Conservative Party of Manitoba has vowed to fight the increase, even mounting a legal challenge when and if Bill 20 is passed.

← Previous: Overdue Helicopter Crashes Near Gillam Next: RRC's 'Blogger in Residence' Moves in for the Summer →
Tags: NDP | Sam Katz