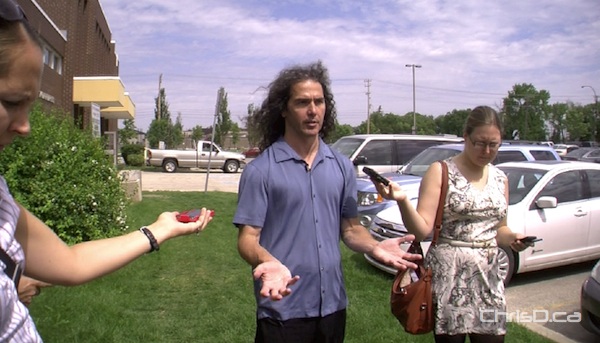 City entomologist Taz Stuart speaks to the media on Monday, July 8, 2013 at the Insect Control Branch on Waverley Street. (CHRISD.CA)

The City of Winnipeg says it gave residents plenty of time to apply for mosquito buffer zones around their property before crews hit the streets Sunday night.

Many residents have been sounding off since the city began fogging for mosquitoes yesterday in 10 areas of the city. One of the main concerns is that the city provided its public fogging notice on Saturday, when many residents were away and otherwise not properly informed. A 24-hour notice is given before the city can begin its fogging operations, and an eight-hour public service announcement is issed before the fogging program resumes.

“If people wanted a buffer zone, you could have been applying back in March, April as well,” said city entomologist Taz Stuart. “You had the opportunity before and this is where we’re at.”

As of Monday afternoon, about 700 residents had applied for a 90-metre buffer zone — roughly double the number from 2011 and 2012.

How to apply for a mosquito buffer zone (proof of residency required):