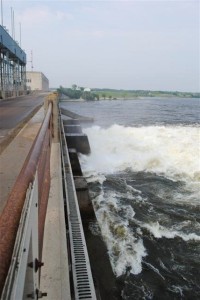 A woman was rescued after climbing over a railing at the Powerview-Pine Falls Dam on Tuesday, July 9, 2013. (RCMP HANDOUT)

A distraught woman who nearly jumped into the Powerview-Pine Falls dam was rescued by RCMP on Tuesday evening.

Police say the 59-year-old woman was walking on Highway 304 when she climbed over the railing to the dam and was standing on the outside ledge. Had she gone into the water, police believe the fast-flowing river would have been fatal to the woman.

With the help of two motorists in the area, RCMP officers pulled the woman back over the railing.