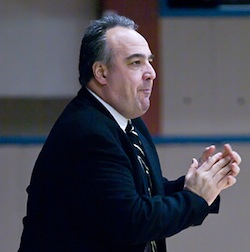 The former head coach of the University of Winnipeg Wesmen men’s basketball team is taking his leadership to Israel this summer.

Dave Crook, who resigned from coaching the Wesmen in January 2010, will be the head coach of the Canadian U16 Maccabi Games basketball team.

Crook started with the Maccabi team last summer in Toronto at a tryout camp and then trained with the team over the December break. The Maccabi Games are the world’s third largest multi sport games, held every four years in Israel for Jewish athletes of all ages.

Competition begins July 18 in Netanyahu, Israel with Canada opening against Turkey before facing the U.S., Argentina and Venezuela in pool play.

Besides being at the helm of Canada’s U16 men’s team, Crook teaches in the U of W’s Kinesiology faculty.