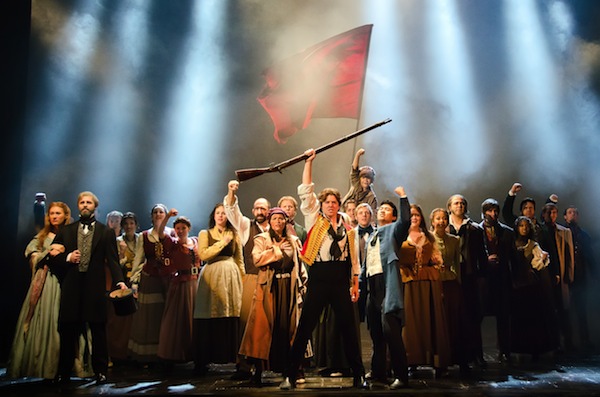 The Winnipeg cast of Les Miserables, which runs now through July 28 at the Centennial Concert Hall. (KYLE FROMAN PHOTO / HANDOUT)

WINNIPEG — Les Misérables, the world’s longest-running musical, is in Winnipeg this week.

Cameron Mackintosh’s 25th anniversary production of Les Mis is the newest rendition of the show, with completely overhauled staging and reimagined scenery inspired by the paintings of Victor Hugo.

Based on Hugo’s classic novel, Les Misérables is an epic and uplifting story about the survival of the human spirit. The score of Les Misérables includes the classic songs “I Dreamed a Dream,” “On My Own,” “Stars,” and many more.

Mackintosh’s Les Mis has a larger-than-life attitude from the sets to the scenery, a meticulously prepared cast, and the foundation of a classic, heartwrenching story so many people have grown to love. It takes us through the 1800’s and shows us the hardships faced during the French revolution, while focusing on the struggles of ex-convict Jean Valjean and his experience of redemption. While it is mostly a serious show, Les Mis isn’t lacking in some good, lighthearted, and sometimes crude comedy.

View the photo gallery from pre-show preparations on Tuesday:

The show was beautifully choreographed, and the vocals were some of the best we’ve ever heard. The only gripe was that it is a sung-through musical with no
dialogue, so if you’re someone who likes conversation, this show may not be for you. Overall, it is a truly spectacular show from start to finish, and the roaring applause after each song and the standing ovation at the end proved that. Mackintosh’s Les Mis will tug on your heartstrings and leave you breathless.

Les Misérables plays at the Centennial Concert Hall Tuesday through Saturday at 8 p.m.; Saturday and Sunday at 2 p.m. and Sunday evening at 7:30 p.m. The show, presented by Broadway Across Canada, is part of a five-city tour in Western Canada including previous dates in Vancouver June 11-23, Calgary June 25-July 7, Edmonton July 9-14, and Regina July 16-21, 2013.