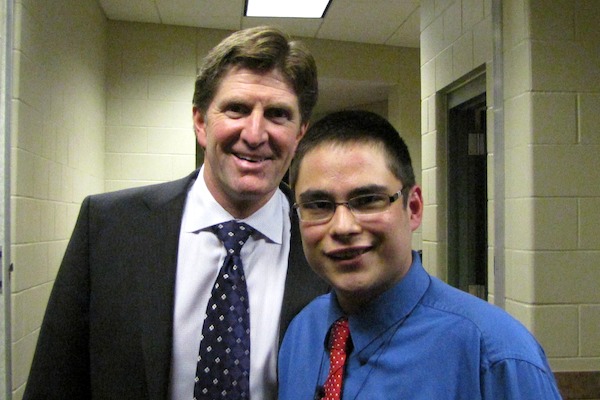 A memorial gala to remember the late Earl Cook is in the works, to ensure the legacy of the 23-year-old hockey fan lives on.

Cook passed away in 2011 from sarcoma, but made an impact on many during his short life. To carry his memory forward, the Earl Cook Memorial Gala on September 5 will launch a series of events, such as a golf tournament and amateur hockey tournament.

Renowned hockey coach Mike Babcock is on board as a guest speaker, while current Winnipeg Jets assistant GM and VP of hockey operations, Craig Heisinger, is the gala’s honourary chair. Heisinger had the opportunity of meeting Cook during his Manitoba Moose days.

Cook was diagnosed with fetal alcohol spectrum disorder (FASD), ADHD and autism. Being a foster child with nowhere to go, Cook was taken in by Debbie Hopkins and her son, Darby.

The gala, being held at the Victoria Inn, will include a special VIP cocktail reception, auction and the keynote speech by Mike Babcock.

Proceeds from the evening will go towards sarcoma research and to Sledge Hockey Manitoba.

Tickets are available at EarlCookMemorial.ca.