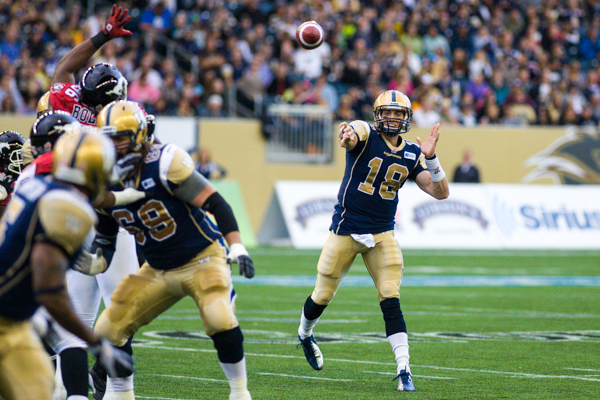 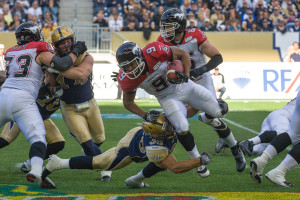 WINNIPEG — There is always a level of optimism when a struggling football team starts a new quarterback, but on Friday night in front of 31,567 at Investors Group Field the Winnipeg Blue Bombers did nearly nothing to carry that optimism through, losing 37-24 to the now 4-1 Calgary Stampeders.

Justin Goltz, in his first professional start following three-plus seasons with Winnipeg, began with some nice momentum by orchestrating consecutive touchdown drives near the first quarter mark. But combined with an atrocious outing defensively, the Bombers struggled to keep pace with the high-powered Stampeders.

“It had its ups. It had its downs,” said Goltz. “Ultimately, we weren’t able to come up with the win in a situation where I feel like if we put it together and use the momentum we had in the first half I feel like these are ball games that we can win.”

Burke wouldn’t tip his hat as to who will get the call under centre next week with an ailing Buck Pierce (abdomen) and a mediocre-at-best outing by Goltz.

But suddenly the Winnipeg offence isn’t the main issue. The defence has been picked apart as of late, and Friday they allowed a third-string quarterback — Calgary’s Bo Levi Mitchell — to go 29-of-33 for 376 yards, 3 TDs, 0 INTs.

Consider this; over the last three weeks the Blue Bombers defence has allowed opposing quarterbacks to go 74-of-85 (87 per-cent completion rate) for 1,024 yards, 7 TDs, 0 INT. And this week a guy named Bo Levi did it in his own first CFL start.

“We have to communicate better. We have to do our jobs better. Period. That’s all there is to it. Because we just let a third-string quarterback come in here and throw like four incompletions. Our pride got to stand up.”

When asked about his defence on Friday, Tim Burke was blunt.

The Blue Bombers now head to Vancouver to face the B.C. Lions on August 5 in a rare Monday-nighter.