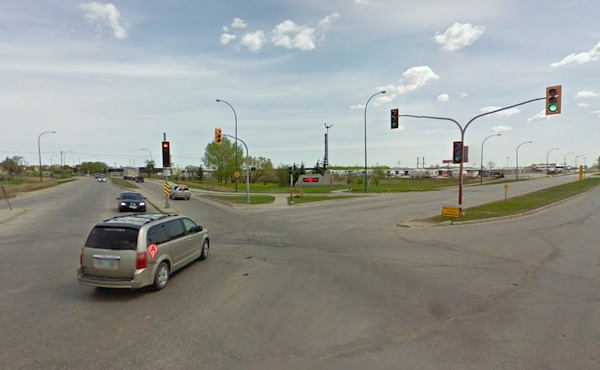 Plessis Road will be widened nearly one kilometre near Dugald Road as part of a $77 million underpass project. (GOOGLE STREET VIEW)

A vital piece of commuter roadway is being closed for more than a year on Sunday to facilitate construction of the new Plessis Road Underpass.

The City of Winnipeg is closing Plessis from Dugald Road to Kernaghan Avenue until the end of 2014 to all vehicle and pedestrian traffic. Once complete, the underpass will handle traffic more efficiently and is said to benefit motorists, cyclists and pedestrians.

The project will include an underpass of the Canadian National rail line located on Plessis Road north of the Dugald Road intersection.

Motorists are encouraged to use alternate regional streets such as Regent Avenue West, Dugald Road, Ravenhurst Street and Lagimodiere Boulevard. Regional information signs have been erected at nearby major intersections, and traffic signal timings will be modified to improve the flow of traffic and encourage drivers to stay on the regional street system. Temporary traffic calming measures will be installed on Bournais Drive before the coming school year begins, and will remain in place throughout the closure of Plessis Road.

Winnipeg Transit routes 49 Dugald and 87 South Transcona will be re-routed during construction.

The $77 million project is being cost-shared by all three levels of government.