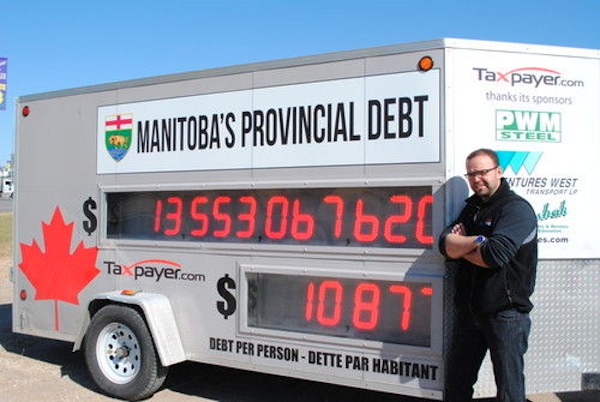 Colin Craig of the Canadian Taxpayers’ Federation poses next to the debt clock to show the province’s growing expenditures. (HANDOUT)

The Canadian Taxpayers’ Federation erected its national Debt Clock at the Manitoba legislature Tuesday to draw attention to the province’s mounting debt.

The large mobile scoreboard showed Manitoba’s debt increasing by more than $72 per second or approximately $6.25 million per day.

“No one would say our province is going to go bankrupt like Detroit yet,” said CTF prairie director Colin Craig. “However, the government definitely needs to get the debt under control by addressing its spending problem. If they don’t our province will eventually have very serious problems too.”

The CTF says the province will spend $839 million on debt interest costs — enough to put the PST back down to 7% and reduce school taxes by 83%.

The Debt Clock has travelled across Canada since it was launched in 2011 and was last used in Manitoba during the 2011 provincial election.