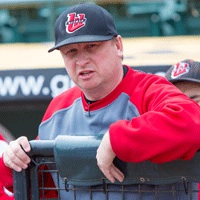 University of Winnipeg Wesmen baseball coach Mike Krykewich will be putting his 30+ years of experience to use next week in Sherbrooke, Quebec.

Krykewich has been named one of the assistant coaches for Team Manitoba at the upcoming Canada Summer Games from August 1-10.

It’s the fourth Canada Summer Games for Krykewich, who served as an apprentice coach in 1997, head coach in 2005 and assistant coach in 2009.

“I am very much looking forward to the Canada Summer Games experience and most importantly guiding our players during the competition to accomplish our team goals,” Krykewich said in a release.

The veteran coach is currently entering his third season at the helm of the Wesmen men’s baseball team.