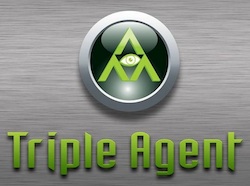 Triple Agent is a new multiplayer game that allows two mobile devices to play against each other when in the proximity of one another (roughly 500 feet).

“The future of mobile gaming platforms will include proximity detection and we look forward to licensing our intellectual property to the many companies that want to enhance their mobile experience,” said developer Mike DeLuca.

The game sees agents engage in a virtual combat when they are close enough and can steal the coveted briefcase from their opponent. Agents are motivated to search out a briefcase and deliver its secrets to changing locations throughout their city. Digital iPhones are also hidden throughout the world which Agents can exchange for real iPhones.

The game is available today in the Winnipeg market on iPhone, iPad and iPad mini. The company plans to expand to other cities in the coming days.

Triple Agent will be available for Android devices in the future.