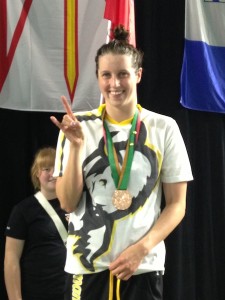 Manitoba swimmer Breanne Siwicki added another medal to her haul on Wednesday at the Canada Summer Games.

Siwicki won gold on the first day of the games in the 1500-metre freestyle, and also picked up two silvers in the 200-metre butterfly and 400-metre medley finals on Monday.

The Canada Summer Games are being held in Sherbrooke, Quebec from August 2 to 17.