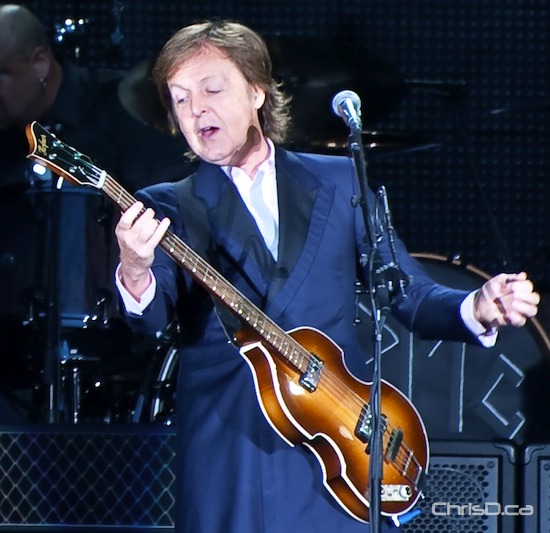 Sir Paul McCartney had Winnipeg on its feet Monday for his sold-out show at Investors Group Field.

Making a return to the city after a 20-year absence, the former Beatle rocked the new stadium well into the night, performing over 30 songs for 31,200 fans over the span of three hours.

The 71-year-old arrived on Sunday and was spotted out over the weekend travelling down Portage Avenue. McCartney caught the camera flashes of fans again on Monday leaving the Fairmont Winnipeg hotel at around 5 p.m. to make his way to the show.

The rumoured local connection that promoters were hinting at all week was revealed when the Winnipeg Police Pipe Band joined McCartney on stage towards the end of the night during a performance of “Mull of Kintyre.” The former Wings member was backed by his band of 10 years — drummer Abe Laboriel Jr., guitarists Rusty Anderson and Brian Ray, and keyboardist Paul Wickens.

Prior to the concert, Mayor Sam Katz awarded McCartney with the key to the city. Katz was the promoter for McCartney’s Winnipeg concert when he played here in 1993.

The “Out There” tour heads west as McCartney plays Regina on Wednesday.