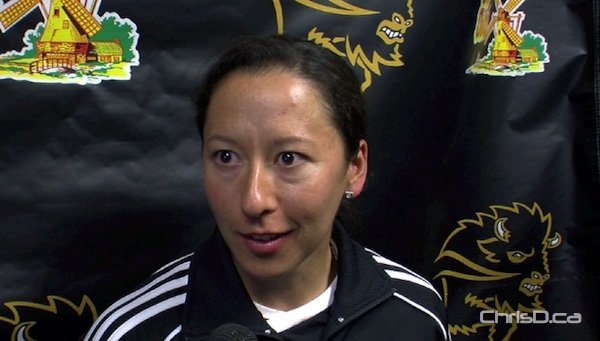 U of M Bison women’s soccer coach Vanessa Martinez Lagunas is introduced to the media on Wednesday, August 14, 2013. (CHRISD.CA)

Vanessa Martinez Lagunas takes the reigns of the Bison program to start the upcoming 2013 season. The veteran soccer player from Toluca, Mexico has an impressive résumé, having spent time with the United States Soccer Federation (USSF) and a member of Mexico’s women’s national team from 1999-2004. She competed for Mexico at the 2001 Summer Universiade in Beijing.

“Canada is a very special country for me, because it was the very first country I visited while I was a player in Mexico,” Lagunas said of her impressions of the country. A soccer tournament in Vancouver was the first international trip outside of her native Mexico. It also happened to be where she celebrated her 18th birthday at the time.

Lagunas, who interviewed for the position in March, received praise from colleague and Bisons football coach Brian Dobie on Wednesday who congratulated her and touted her impressive list of qualifications to the media.

She is the fourth coach in the Bisons’ soccer program in nine years and says one of her goals — besides creating a competitive on-field product — is to get fans more enthused about the sport and fill more seats in the stands.

The Bisons open their regular season at home on September 6 when they host Saskatchewan at 6 p.m.