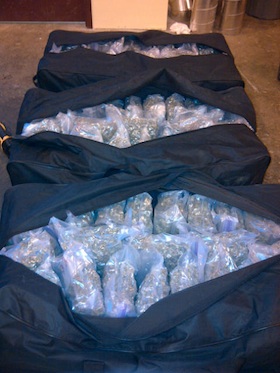 RCMP found nearly 400 pounds of marijuana in a semi-trailer truck in Headingley on August 10, 2013. (RCMP HANDOUT)

Two men are facing charges after RCMP in Headingley came across nearly 400 pounds of marijuana hidden in the cab of a semi-trailer truck.

Police were conducting a vehicle inspection at the Headingley weigh scales on August 10 when officers noticed the odour of marijuana coming from the truck’s cab.

Officers seized $8,000 in cash and 388 pounds of marijuana concealed in duffle bags and boxes.

Qamer Shams, 40, of Newmarket, Ontario and Jeff Muster, 30, of Surrey, BC are facing numerous drug-related charges. Both men appeared in Winnipeg court on Wednesday.