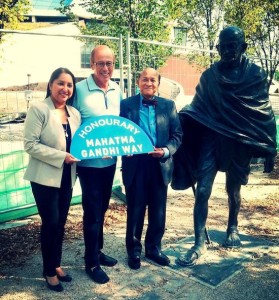 Old Kildonan Councillor Devi Sharma, Mayor Sam Katz and Dr. K Dakshinamurti, president of the Mahatma Gandhi Centre of Canada, hold up a sign-topper in honour of Mahatma Gandhi at The Forks on Thursday, August 15, 2013. (OFFICE OF THE MAYOR / TWITTER)

The City of Winnipeg has renamed a stretch of York Avenue after Mahatma Gandhi, which will lead to the Canadian Museum for Human Rights at The Forks.

Mahatma Gandhi Way will appear in sign-topper form above signs on York Avenue, as the honourary designation runs along York Avenue from Main Street to Waterfront.

Gandhi was the preeminent leader of Indian nationalism in British-ruled India, and preached non-violent civil disobedience to lead India to independence and inspired movements for non-violence, civil rights, and freedom across the world.

“Through this honourary street designation, the City of Winnipeg is able to pay tribute to Mahatma Gandhi’s lifetime commitment to peace and non-violent social justice,” said Mayor Sam Katz.

A statue of Mahatma Gandhi was donated to the CMHR by the Government of India at the request of Winnipeg cardiologist Dr. Naranjan Dhalla. It was installed in its permanent location adjacent to the museum in 2010.