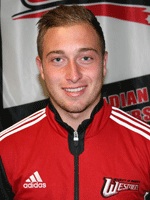 A member of the Canadian National U18 soccer team has committed to the University of Winnipeg Wesmen.

Enrique Garcea is a midfielder/defender from Glenlawn Collegiate who is currently representing Canada at the L’Alcudia International Tournament in Valencia, Spain.

The 18-year-old was a member of the provincial soccer program for four years before joining the National Development Centre. After several months of travelling, Garcea is looking forward to return to his hometown and join the Wesmen.

The Wesmen men’s soccer team will play two pre-season matches against the Winnipeg Soccer Academy August 22 and August 28 before opening up their regular season schedule on Saturday, August 31 on the road in Saskatoon against the University of Saskatchewan Huskies.