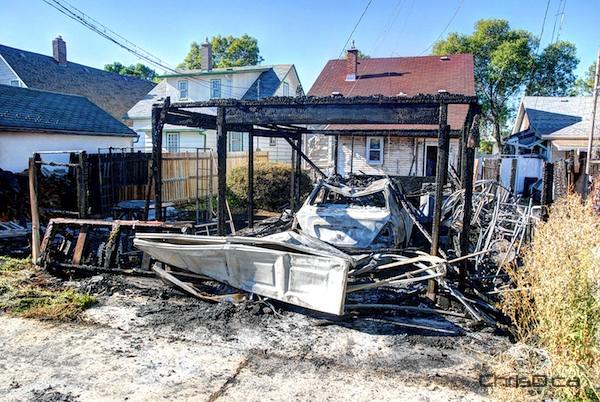 A garage and vehicle were destroyed after being set on fire in the 700 block of Pritchard Avenue on Thursday, August 22, 2013. (STAN MILOSEVIC / CHRISD.CA)

The fires, believed to be arsons, started around 2 a.m. and targeted properties in the North End.

A garage and vehicle in the 700 block of Pritchard Avenue were completely destroyed in one of the incidents. Damage is estimated at $40,000.

Nearby, a one-and-a-half storey home was also torched on the same street, causing $150,000 in damage.

A fence was then set on fire in the 900 block of Manitoba Avenue, followed by another fire in the 800 block of Alfred Avenue that destroyed a couch sitting in a back lane.

← Previous: 'Bannatyne Carnaval' to Heat Up the Exchange Next: Keith Urban to Play MTS Centre in January →
Tags: Fire