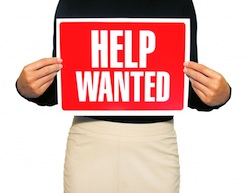 Canadians left 290,000 full- and part-time jobs unfilled in the private sector in the second quarter of this year, according to the Canadian Federation of Independent Business (CFIB).

“While the overall vacancy rate dropped to 2.4 percent (from 2.5), the problem continues to be most acute for smaller businesses,” said Ted Mallett, CFIB’s chief economist and vice-president. “In fact, those with fewer than 4 employees saw an increase in their vacancy rate (4.5 percent), while larger businesses all saw decreases.”

Manitoba vacancy rate for private sector jobs was 2.5 percent, while Saskatchewan has the highest, raising to 4.1 percent. Alberta’s rate dipped (3.4), but continues, along with Newfoundland and Labrador’s (3.0) to be above the national average. Quebec (2.4) and British Columbia (2.4) landed right around the average, while Ontario (2.1), New Brunswick (2.0), Nova Scotia (2.0) and Prince Edward Island (1.8) had lower-than-average vacancy rates.