STARS Kept Busy Over the Weekend 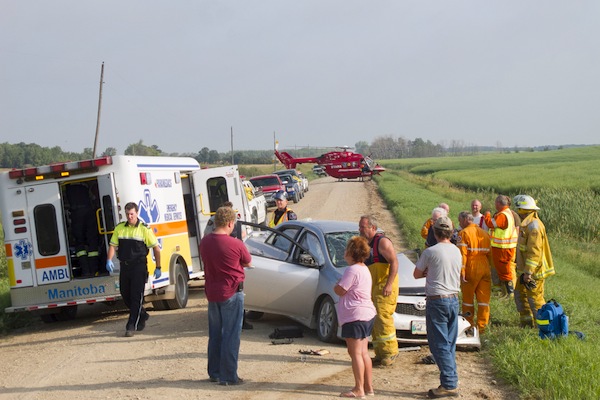 STARS Air Ambulance lands on a gravel road near Belmont, Manitoba on Saturday, August 24, 2013 during one of its busiest days in the province so far. (STARS / HANDOUT)

STARS Air Ambulance experienced its busiest day yet in Manitoba over the weekend, responding to three calls within 12 hours on Saturday.

STARS was first dispatched to a single-vehicle rollover at 3 a.m. on a gravel road just north of Portage la Prairie. A woman in her early 20s was injured and later transferred by ground ambulance to hospital in Portage after STARS doctors determined that was the best course of action for her care.

Around 8:15 a.m., STARS arrived on scene to a T-bone crash between a car and a pickup truck on a gravel road 20 km northeast of Killarney south of Belmont, Manitoba. A man in his 40s was airlifted to the Health Sciences Centre in Winnipeg due to his upper body injuries.

Then shortly before 4 p.m., STARS transported a woman to HSC after a fatal three-car collision on Highway 3 a few kilometres south of Brunkild.

“Obviously we like being able to be part of the team that helps people out when they need it most, but it would be nice if drivers would take a little more care on the roads,” said STARS spokesperson Colin Fast.

The non-profit aircraft and its medical team became a permanent fixture in Manitoba after being utilized in the province during the 2009 and 2011 floods.

← Previous: Goldeyes Wind Down with Week of Home Games Next: CONTEST: Win Tickets to Bisons Football vs. Saskatchewan →
Tags: Accident