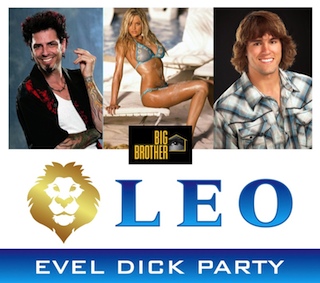 The party’s organizer, Mike Davidson, is also promising a special mystery guest to pop out of Pandora’s Box.

“In many respects the unnamed mystery guest is as big or a bigger star than Evel Dick, Hayden or Kara, and will absolutely shock those in attendance,” Davidson said. “We hope that people who attend this party, and who are big fans of the show will be floored by how much fun they actually have. It’s not like spending $75 to go to a concert and sitting miles from the stage, it’s almost like you’re in a dream based on an episode or something.”

We have three (3) pairs of tickets up for grabs.

Tickets can be purchased from The LEO office, 671 Pembina Highway for $20, or you can save $5 if you have downloaded The LEO App.

The “Big Brother” stars will also be appearing at Kildonan Place for a meet and greet with fans on September 5 and September 7 (“Big Brother Canada” houseguests).

No purchase necessary. Skill testing question required. One entry per person, please. Multiple entries will not be counted. All personal information is handled in accordance to our Privacy Policy, and then discarded after the contest. Contest closes Monday, September 2, 2013 at 5 p.m. CT. Manitoba residents only.