U of M ‘SnoBots’ Win Big at Robot Competition 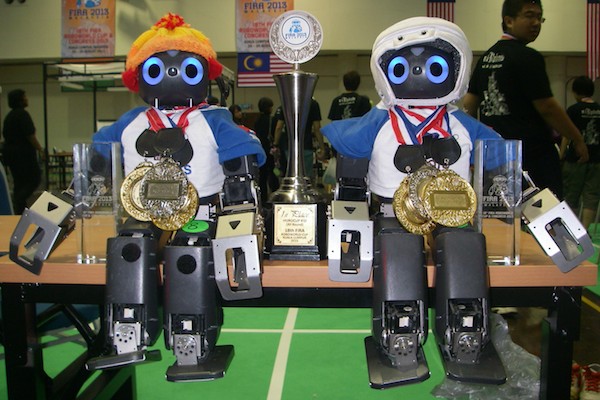 Two robots (SnoBots) created at the University of Manitoba won the kid-size division of the 2013 FIRA HuroCup in Kuala Lumpur, Malaysia. (HANDOUT)

A pair of small robots developed at the University of Manitoba have claimed first place at an international competition.

Although small in stature, the SnoBots, named Jimmy and Jeff, came in first place in wall climbing, first place in weightlifting, second in United Soccer (where the robot must join with other competitors to form a soccer team), fourth in sprinting and fifth in soccer penalty kicks. Based on the score across all events, the team won the highly-coveted all around event: the King’s class at HuroCup.

“Doing well in one event is usually a tough goal when you have only two students going and many teams have a dozen, and the competition is the best in the world. But doing well enough across the board to win the entire event is an enormous achievement — we’re overjoyed both with the performance and what it demonstrates about our core research,” said Dr. John Anderson, head of the U of M’s computer science department.

The robots were even so thrilled with their win, they did a victory…