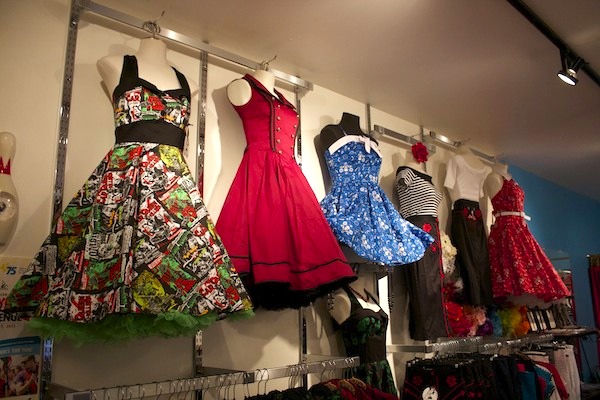 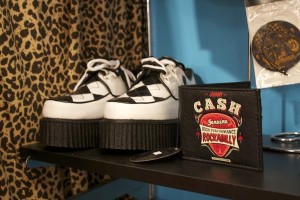 The creeper style of shoe was in fashion for men during the 1950s. (EDEN RAMSAY PHOTO)

Rockabetty’s rockabilly, psychobilly, and retro-inspired fashion started off in a Winnipeg-based online shop. Since then, Rockabetty has found a home at 121B Osborne, the centre of Winnipeg’s lively and eclectic Osborne Village. Rockabetty’s wares draw from a modern twist on a vintage genre of music: rockabilly.

Rockabilly is one of the oldest forms of rock and roll. It began by combining country and rhythm and blues styles of music and often features a standup bass. It began in the early 1950s, primarily from the southern United States. The late, great Elvis Presley, Johnny Cash, Chuck Berry, and Buddy Holly are a few famous examples of early rockabilly musicians. This music was voice for a younger generation of the time. It provided them an outlet of rebellion and freedom that went against the more conservative social norms of the 1950s.

Since then, the rockabilly genre has gone through several revivals, but has always found a loyal following. Modern rockabilly often takes the form of a fairly new genre, psychobilly, which combines influences from rockabilly, punk rock, and classic horror movie themes. 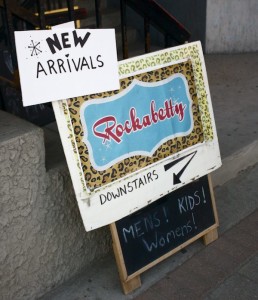 Rockabilly and psychobilly are music styles that can be a lot of fun, and a lot of fun to dance to. It even makes me want to take up swing dance lessons one day.

With the first annual Winnipeg rockabilly festival, River City Rumble, taking place last month at the Metropolitan Entertainment Centre, it is a subculture that has a growing following in this city.

Rockabetty is Winnipeg’s foremost outfitter for this subculture. The store carries a variety of retro-influenced brands including Vintage Betty, Sourpuss, Heartbreaker, Rago, Bettie Page, Rockmount Ranchwear, Steady, and Rockabetty, the shop’s own clothing and accessory line that’s designed and manufactured in Winnipeg.

The boutique offers clothing and accessories for the whole family. Here you can find something for women, men, and even adorable miniature outfits for young billies and betties-in training.

At Rockabetty you can take your pick from their collection of dresses, cardigans, rockabilly shirts, skirts, shoes, shapewear, jackets, coats, pants, jeans and capris.

Clothing can be tried on in their change room behind a leopard print curtain where you can sit on a red, leopard print upholstered bench to experiment with different looks in style. The red change room contrasts nicely with the bright blue wall behind it. Vintage and rockabilly inspired posters are also displayed around the shop. This adds seamless décor and visual interest to the place.

I love the variety of dresses that Rockabetty offers in an array of playful prints. One I was drawn to was covered in B-movie posters from the age of classic horror. A lime green crinoline was fitted underneath the dress and paired perfectly with its brightly coloured print and added some volume and bounce to the look. There are several colours of crinolines that Rockabetty sells which can be paired up with your retro dress depending on style and colour.

I couldn’t help leaving without picking up a shiny, vinyl black and red wallet with a white anchor print on it from the Sourpuss brand. Coming back for one of their lovely dresses is also on my to-do list.

Rockabetty is the place to go for reasonable prices, friendly and helpful service as well as products with a whole lot of funky attitude.

So when you are looking to be outfitted with a retro look, dress up as a B movie damsel in distress, or let out your inner greaser, hip cat, or pin-up bombshell, just jump into your hot-rod and look no further than Rockabetty to have you rockin’ around the clock from head-to-toe.