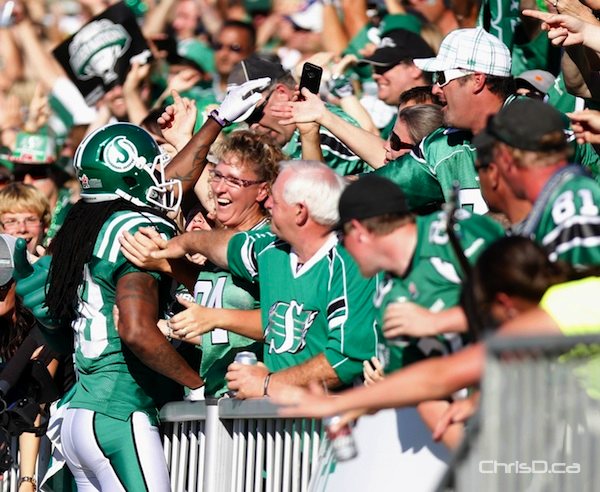 Saskatchewan Roughriders wide receiver Taj Smith (L) celebrates his touchdowns with fans during while playing the Winnipeg Blue Bombers during the second half of the CFL football game in Regina, Saskatchewan September 1, 2013. The Roughriders won the game 48-25. (DAVID STOBBE / REUTERS)

REGINA — For a moment, it appeared the Winnipeg Blue Bombers were about to silence their doubters.

By the final gun, the Saskatchewan Roughriders were 8-1 for the first time in franchise history, and the 1-8 Bombers had dropped their ninth-straight Labour Day Classic in Regina by a score of 48-25 in front of an expanded capacity sellout crowd of 44,910 at Mosaic Stadium.

“If you look at the positives, our offence played better as a unit. I think (offensive coordinator) Marcel (Bellefeuille) made some great adjustments during the game,” said Winnipeg head coach Tim Burke. “I thought Justin Goltz played good until the end of the game when he threw the two picks, because we were in the game. And he contributed a lot towards those 25 points.”

At the half, the Blue Bombers led 18-14. But Goltz’s pair of costly throwing errors in the fourth quarter — both of which Saskatchewan capitalized on with majors as part of a 24-point quarter — sealed Winnipeg’s fate.

“I put them in a short field twice with two mistakes that I’m not very happy about, and I need to learn from it,” said Goltz on the heels of his 18-of-29 for 182 yards passing outing. “In both situations I had a short, easy throw. But I took it upon myself to try and get more.”

“I feel like I did (let my team down),” added the 26-year-old pivot who also had 73 yards rushing and two touchdown scampers, including a 46-yard blast up the middle on a bobbled snap. “I don’t think there’s any other way to explain it. We were in that football game. We responded to a score. We were down by 13, then turned over on a short field and it changes the game extremely quick. You can’t turn the ball over with a short field with one of the most efficient offences in the CFL.”

But a better performance following all the turmoil and turnover this team has faced over the last few weeks may make some feel better about the future. But others disagree.

“No. There is no such thing as moral victories in pro football,” said Bombers veteran cornerback Brandon Stewart. “We’re 1-8, and that’s the reality. We need to be better. Everybody needs to be better.”

Winnipeg hosts the Roughriders in the annual Banjo Bowl home-and-home series finalé at Investors Group Field next Sunday. The game is sold out.