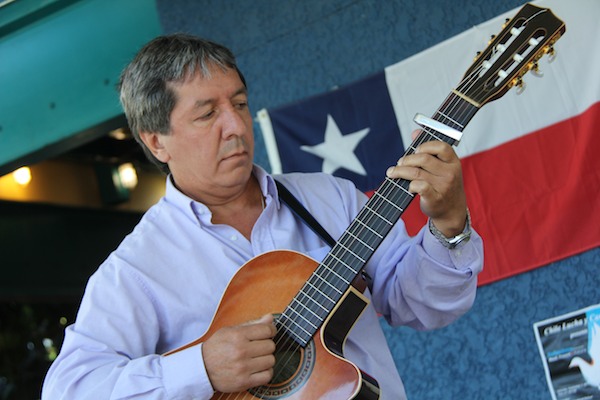 Victor Bustamante performs a song during a news conference at The Forks on Monday, September 2, 2013 to kick off activities surrounding the 40th anniversary of Chile’s coup d’état. (SHANE GIBSON / METRO WINNIPEG)

Members of Winnipeg’s Chilean community are marking 40 years since the September 11, 1973 coup d’état in their home country.

It’s been four decades since General Augusto Pinochet led an overthrow of the democratically-elected government of President Salvador Allende.

On Monday, local Chileans gathered at The Forks to kick off a series of events to mark the occasion.

“Our goal is to share our reflection of that history with our friends, neighbours and co-workers in Winnipeg, where we settled and brought up our children and now grandchildren,” said Jaime Carrasco, who was taken as a political prisoner for three months in the wake of the coup and arrived in Winnipeg in 1974. “The global events also have a message of ‘Nunca Mas,’ never again, meaning we hope a situation like the one that took place in Chile never happens again, anywhere. Human rights must always be respected.”

Many Chileans who were forced to flee ended up rebuilding their lives in Canada, including in Winnipeg.

The Chile 40 Winnipeg committee has organized a film festival, concerts, a commemoration ceremony and workshops for this month.

A full list of events can be found at Chile40Winnipeg.ca.