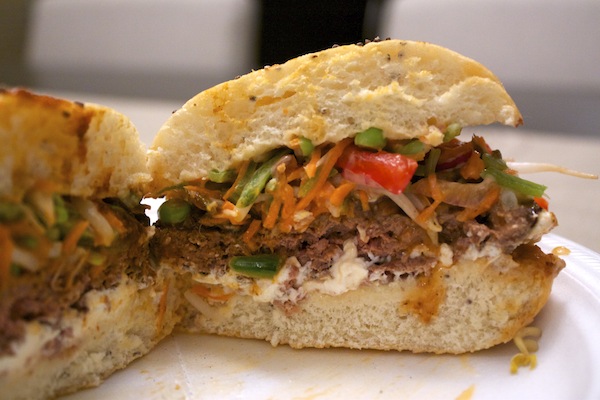 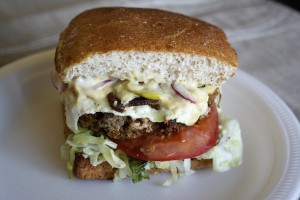 My last three meals have all involved eating a big, juicy burger, but I am not ashamed of this. It was in the name of research.

This week, Winnipeg celebrates Le Burger Week, a celebration of finding the perfect burger. But act fast, as the dining adventure ends today.

The event started in Montreal in 2012. This year, Winnipeg, Quebec City, Montreal, and Vancouver are all participating in the friendly burger competition, which began September 1. Restaurant-goers then vote for their favourite burger via Twitter or Facebook.

The contest rules are simple. The burger must cost $10 or less and contain cheese. Other than that, it’s a burger free-for-all and anything goes when it comes to burger toppings. The contest creates a friendly competition between restaurant chefs to see who can create a burger that will stand ahead of the burger pack.

A total of 29 Winnipeg restaurants are participating in the competition. 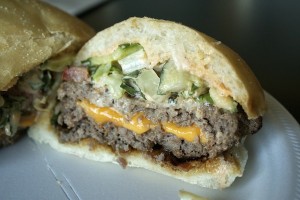 I decided to try burgers from the top three contenders in the competition so far. At the time of writing this, Boon Burger is in third place with 530 points, Saigon Jon’s is in second place with 750 points, and Unburger takes the lead with 1690 points.

My entry into the world of Le Burger Week started with Saigon Jon’s. I had written a review of Saigon Jon’s last year. The place has some delicious food options, but no burgers on their menu, so I was curious to see what their entry into the burger contest would be like.

Saigon Jon’s entry into Le Burger week is formidably named the Motha’ Effin’ Royale with Cheese ($10), a name inspired from a funny conversation between Samuel L. Jackson and John Travolta in the movie “Pulp Fiction.”

What exactly is in the explicitly-named burger?

This one was very good. I am not a huge peanut butter fan and so was a little skeptical about this being an ingredient in a burger, but it definitely added a delicious nutty flavour into the mix. The hand pressed beef patty contained Bothwell cheese, which was gloriously melted in the middle of the patty. The patty was thick, juicy in the middle, and a little more cooked on the exterior, pure meat and cheese heaven. Freshly chopped lettuce, tomato, crispy onions and house pickled pickled cucumbers added a nice, fresh flavour contrast to the nuttiness of the peanut butter, and the “motha effin’ royale sauce” brought a creamy sweetness. A light, fluffy Kaiser bun held it all together very nicely. 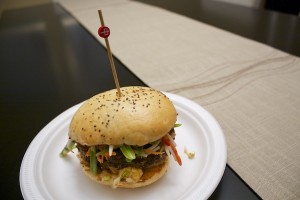 The second Le Burger Week burger I tried was Boon Burger’s entry, the vegan Bacun Cheese Burger ($8.75). I know Boon Burger for producing quality vegan burgers that tempt even the most meat-loving carnivores to take a bite.

This one had a very nice presentation with Boon Burger’s signature square bread buns. The bread itself was a nice, thick, whole grain with a fluffy interior. The grilled boon patty of the burger had an interesting texture, reminiscent of ground beef, but tasted lighter than an actual beef patty. The mayo, Dijon, and daiya cheese mad the whole burger taste very creamy. The smokey bacun added a nice smokey flavour accent and the generous portions pickles, red onion, tomato, and lettuce added texture, flavours and crispness to the burger. The burger itself tasted very fresh and lighter than your more traditional large burger. As a personal preference though, I preferred the unusual flavour combination and beef patty of the Motha’ Effin’ Royale with Cheese burger from Saigon Jon’s. It was a close call though.

Last on my list of Le Burger Week burgers to try was from Unburger. Unburger’s entry for the contest was call the Shang-Awesome! ($9.50) 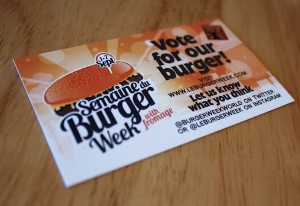 Unburger is one of my favourite places to go for a good, quality burger. I’ve tried a few of their burgers such as the Afternoon Delight, Blueberry Yum Yum, and the Shanghai, which I reviewed in an earlier post during Osborne Village’s food festival, Taste of the Village, last fall.

This one was by far my favourite of the three I tried. It is actually a spin on the Shanghai burger I had tried from them previously. However, in this case they added Canadian goat cheese and “hot damn! mushrooms.” When ordering the burger they asked if I wanted it regularly spiced or extra spicy. Being the adventurous type, I asked them to kick it up a notch. It was definitely spicy. My mouth was on fire, but in the best way possible. The mouth-watering, creamy goat cheese not only was delicious, but helped to counteract the spiciness of the burger. The in-house made Asian slaw was delicious as always, with julienned carrots, pea shoots, and onions. The beef patty was also thick, juicy, and smothered in a delicious spicy sauce along with the mushrooms. The presentation of the burger was also lovely with Unburger’s hand-made wooden skewers holding it all in place.

Le Burger Week is definitely a fun way to try out different restaurants in the city and for burger lover’s to see new possibilities for their favourite food on-a-bun.