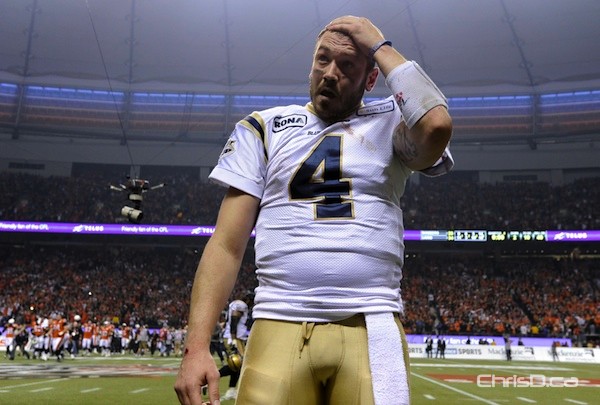 The football club broke the news shortly after their 25-13 Banjo Bowl win against the visiting Saskatchewan Roughriders.

“Buck has been a true warrior and a consummate professional during his time in Winnipeg and we sincerely thank him for his four years of service to our organization,” said acting GM Kyle Walters. “In Akeem, we are getting a veteran Canadian receiver who, at age 26, is still entering the prime of his career. His presence immediately helps upgrade our non-import talent on our roster.”

Foster (6’4″, 212 lbs. from Ajax, Ontario) was selected by the B.C. Lions in the fourth round (24th overall) of the 2010 CFL Draft and became a mainstay in the Lions’ receiving corps over the next two seasons, recording 61 receptions for 949 yards and nine touchdowns in 32 starts.

The injury-ridden Pierce, 31, joined the Bombers in April 2010 and made 31 starts over four seasons, completing 486 passes for 6,320 yards and 25 touchdowns against 31 interceptions.