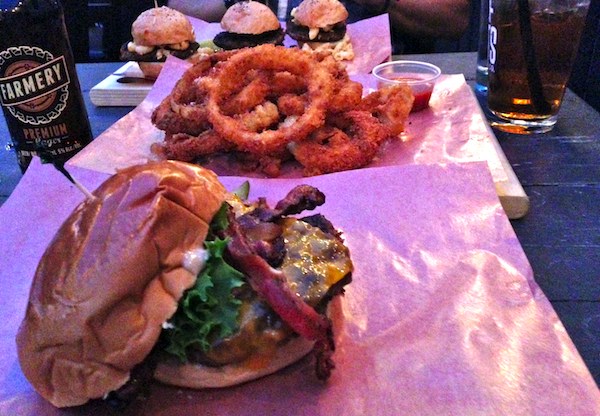 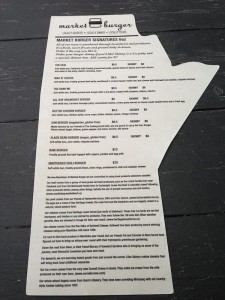 The Manitoba-shaped menu speaks to the local diner experience that the restaurant prides itself on providing.

On Friday night I visited Market Burger. I’ve heard a lot of great things about the joint, so it was about time to check it out for myself. My date and I decided to enjoy our meal on the rooftop patio — a nice little addition to the restaurant. The patio is on the smaller side, but not cramped, with wooden benches and chairs. We were happy we got there when the sun was setting, because of the charming lights strung around the entire rooftop.

The menu wasn’t lacking options. Shaped as our own homeland of Manitoba, you can tell whoever came up with this place really wanted the “totally local” vibe to show through in every inch of the place. At Market Burger you can choose from a number of burgers, or you can build your own. They also offer a good amount of sides — fries, onion rings, and even mac n’ cheese.

After some deliberating (burgers are serious business!), I decided to build my own burger, while my boyfriend opted for the sliders. We decided to share an order of onion rings as well. We may or may not regret not trying the massive grilled cheese burger that they have on special right now (a burger between two grilled cheese sandwiches. Really.) Our server (Jade) was great — friendly, energetic, and knew the menu inside and out. Our drinks were quick to come out, and our food took about 25 minutes. I was starving so it felt like longer than that. 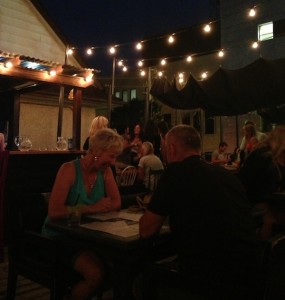 Market Burger’s rooftop patio is an ambient setting along the Corydon Avenue strip once the sun goes down.

I like how Market Burger takes the rustic route — just wooden boards with a bit of parchment paper as plates. My burger was pretty good. It definitely tasted like a homemade burger, as opposed to the fast food taste you get with other burger joints in Winnipeg. The bun was light and fluffy, the patty was thick and seasoned well, the bacon was perfectly cooked and crispy, and the lettuce was fresh and not wilted. However, my burger wasn’t served as hot as I like it to be (neither were my boyfriend’s sliders), same with the onion rings — which took away from the flavour of the meal as a whole. That aside, the onion rings were very good and came large and crispy fried in just enough batter. They could have used a bit more seasoning but they were still tasty. I also kind of regret adding dijon mustard to my burger — I thought it would be good, but it kind of spoiled the taste. That was my bad though, not the restaurant’s. My boyfriend had two of the mac n’ cheese sliders on his platter, and one of of The Desi. He enjoyed them. 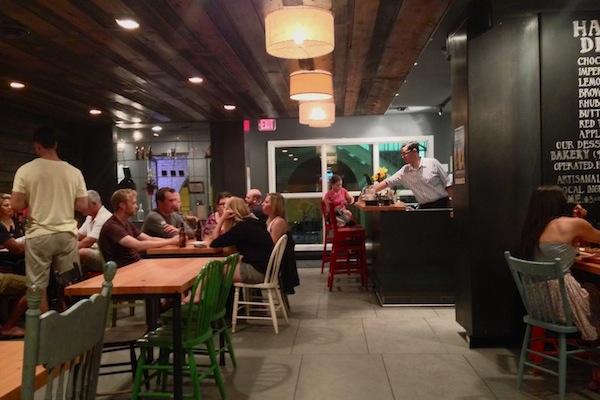 The interior of Market Burger below the popular rooftop patio.

Overall, Market Burger is a must, at least once, for any Manitoban or anyone who wants to get a taste of what Manitoba is all about. The restaurant is local inside and out, and they care a great deal about what ingredients go into their food. The place is still pretty new, so I imagine in time as they work out the kinks, they’ll be even better.

Stefanie Cutrona is a Creative Communications advertising major at Red River College and a freelance videographer at Little Bird Films. Follow her on Twitter: @stefspeaks.