Home » Sports » Blue Bombers Finally Win One for the Fans

Blue Bombers Finally Win One for the Fans 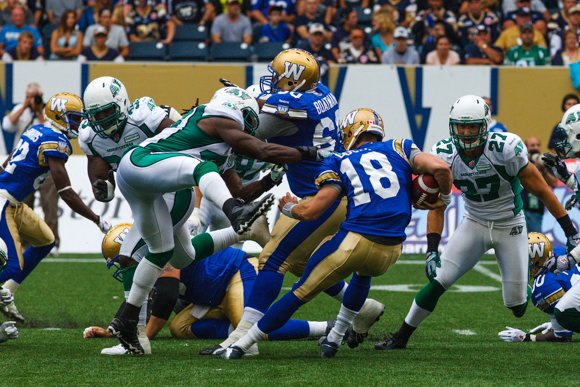 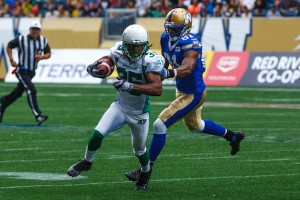 WINNIPEG — The Winnipeg Blue Bombers evened the score with their prairie rivals from Regina on Sunday afternoon with a 25-13 victory over the Saskatchewan Roughriders in the tenth edition of the Banjo Bowl in front of a sellout crowd of 33,500.

The victory — Winnipeg’s first at Investors Group Field — squares the all-time Banjo Bowl series at 5-5, and splits the home-and-home that began last week with Winnipeg’s 48-25 loss in Saskatchewan.

Blue Bombers faithful have stuck with this team through thick and thin this year, all despite going winless for over two months and compiling a shaggy 2-8 record.

“We’ve got incredible fans, and I’ve always said; they’ll let you know whenever you’re not doing what you need to get done,” said veteran left tackle Glenn January. “This is a community that demands the best from us, and rightfully so. They support us through thick and thin, and we know that it’s been a long while since this club has been able to reach the ultimate goal. And this is nowhere near a Grey Cup victory, but it’s definitely a step in the right direction for this club. It’s had some turmoil and change up to this point, and this is nothing more than a first step and hopefully we all understand that and continue to prepare the way that we did to help get this win.”

“Like I said, we’ve got the best fans in the league,” said head coach Tim Burke. “Part of the thing that I felt bad about through the last few weeks is that we’re letting the fans down, because they are truly tremendous. When I encounter people on the street they’re always so positive and they’re always behind you. And it’s nice to reward them with a win.”

“It’s time for us to start winning,” said defensive back Marty Markett, who recorded a football hat trick of sorts with a sack, interception, and fumble recovery on Sunday. “We wanted to win on all three phases; offence, defence, special teams, and I feel like we did that tonight. It’s a good team win.”

While the defence and special teams did the heavy lifting, the offence struggled. Justin Goltz, in his fourth career start at quarterback, was unable to lead his offence to even a single first down in the first half. He finished the game 8-of-17 for 129 yards and an interception, and added six carries for 56 yards and two rushing touchdowns. He fumbled twice, losing one.

The team totalled a mere 183 yards of net offence.

Winnipeg now prepares for a short week, travelling to Edmonton for a matchup against the 1-9 Eskimos on Saturday.