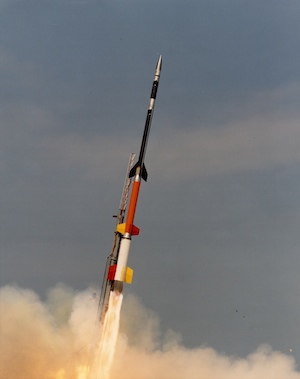 The first Manitoba-made Black Brant rocket is now on display at the Manitoba Museum. (WIKIPEDIA)

The Manitoba Museum’s Science Gallery has a new artifact on display in the form of a Black Brant rocket.

Magellan Aerospace has gifted the $100,000 rocket to commemorate the 50th anniversary of its first Black Brant launch, which also happens to be the first made-in-Manitoba space rocket.

“We know the museum is the perfect place to display the Black Brant rocket for the enjoyment of Manitobans today and for future generations,” said Don Boitson, Magellan Aerospace’s vice-president and GM. “The Black Brant is an important piece of Manitoba’s heritage and showcases one of Manitoba’s significant contributions to the field of rocketry and space science.”

The rocket was launched on June 15, 1962 and since then more than 1,000 rockets have been sold to customers worldwide. The Winnipeg-made rocket is flown by NASA and space agencies around the world.

“Getting a Black Brant is a major event for the Science Gallery — it’s like our version of the Museum’s Nonsuch,” said Scott Young, manager of science communications and visitor experiences.

An official “launch” of the display will take place at 9:30 a.m.