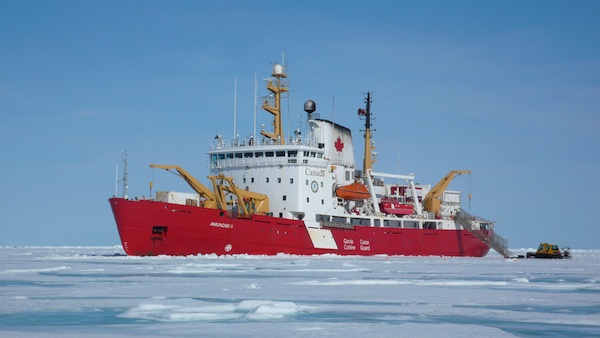 Three men, including a University of Manitoba researcher, were killed Monday when the helicopter they were riding in crashed in Canada’s Arctic. The aircraft was based on the CCGS Amundsen icebreaker. (WIKIPEDIA)

Three people, including a Manitoba researcher, have been killed after a Canadian Coast Guard helicopter crashed into icy Arctic seas.

Klaus Hochheim, a University of Manitoba science researcher, was among the three killed when the chopper went down on Monday night. Marc Thibault, commanding officer of the icebreaker Amundsen, and helicopter pilot Daniel Dubé were also killed.

The three were on the Messerschmitt BO-105 helicopter that was based on the CCGS Amundsen when the aircraft went down in the waters of M’Clure Strait off the coast of Banks Island.

“It is a grim reminder of the very real dangers faced on a regular basis by those brave individuals who conduct research and patrol our Arctic — one of the harshest and most challenging climates in the world — to better understand and protect Canada’s North,” Prime Minister Stephen Harper said in a statement.

The Transportation Safety Board is investigating.