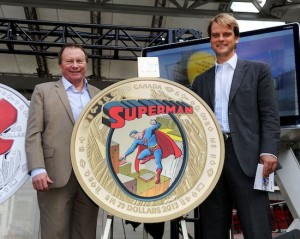 Seven new coins to commemorate the 75th anniversary of Superman have been released by the Royal Canadian Mint.

Co-created by Canadian Joe Shuster and his American collaborator Jerry Siegel, the Man of Steel is now honoured on collector coins sold at Mint boutiques across the country.

“Seventy-five years after Superman’s introduction to the world, Mint employees are proud to honour Superman’s legacy by producing a special series of gold, silver and cupro-nickel collector coins for Canadians and collectors alike to treasure for years to come,” said Ian E. Bennett, president and CEO of the Royal Canadian Mint.

The coins can be purchased beginning today at the Winnipeg, Ottawa and Vancouver Mint boutiques, at Canada Post retail outlets or ordered directly at Mint.ca/Superman.