Home » Columns » REVIEW: A Look Back at Downtown’s ManyFest

REVIEW: A Look Back at Downtown’s ManyFest 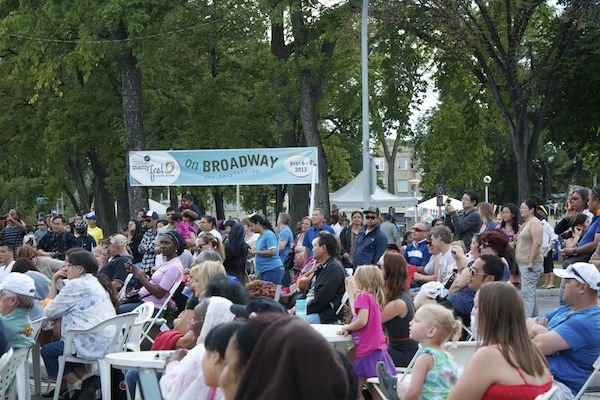 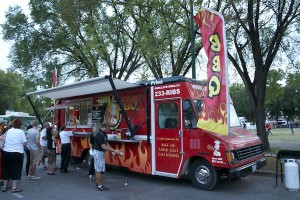 Last Saturday I had the pleasure of attending Winnipeg’s downtown ManyFest for the first time.

ManyFest ran from September 6-8 over the weekend and included a number of scheduled events on Broadway, which was closed off from traffic from the corner of Osborne Street to Donald Street.

Broadway was lined with various vendors selling beautiful crafts, clothing, delicious looking food, and other wares for ManyFest’s Farmers’ & Artisans’ Market. This part of the event was reminiscent of the downtown farmers’ market that started this summer near the Hydro Building on Thursdays. I left with a delicious jar of salsa and a wide-brimmed hat.

As we made our way down Broadway, various performers lined the street. Two main stages on Memorial Boulevard and Carlton Street entertained large crowds for the Big Dance on Broadway event. The music acts covered a wide range of styles and I heard rock, as well as music influenced by Chinese and Caribbean cultures. Certain areas on Broadway’s centre curb were reserved for other performers such as contemporary and belly dancers. 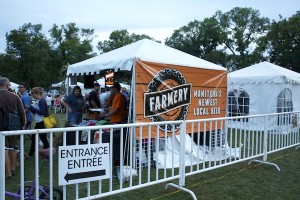 Near the Memorial stage is where the Food Truck Wars and Wine and Beer Festival took place. Tickets were sold at $2 each to buy samples from 12 competing food trucks and various wines and beers. Food truck samples cost one to two tickets each and drink samples were three tickets each.

It was unfortunate how long the line-ups for the food trucks were and how many of them ran out of food. The average wait time for a food truck was one to two hours. I waited in line for the Lovey’s BBQ truck for at least an hour and by the time I had got there, they had run out of pork (but still had beef). I believe that this was the first time that ManyFest had the Food Truck Wars event so I imagine there were some kinks to work out. I think to make this a more successful event more food trucks definitely need to be involved and hopefully with more food on hand. I’m assuming the event will run more smoothly if they continue it at next year’s ManyFest event. I tried Lovey’s BBQ beef poutine which was good with flavourful, smoky beef, cheese curds and gravy smothered over homemade French fries. 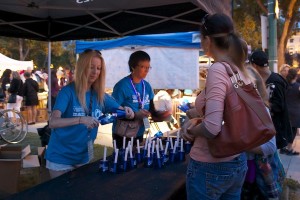 ManyFest volunteers hand out candles for the Parade of Lights. (EDEN RAMSAY PHOTO)

The Wine & Beer Festival was where participants could sample a few types of Canadian beers as well as a wide range of red and white wines. I tried the fairly new local beer, Farmery, who brew their beer from the ground up with a barley and hops farm in Neepawa, MB. The light lager is a flavourful one and I enjoy its fresh taste that is more hoppy-tasting than most mainstream lagers.

When the sun dipped below the horizon, white candles were handed out for the Parade of Lights event. A blue plastic handle holder stamped with the ManyFest logo surrounded the candle top. As well as serving to collect dripping wax, the candle holder allowed the light to cast a cheerful blue glow and it was great to see such a large mass of glowing people walking around and lighting up the street. 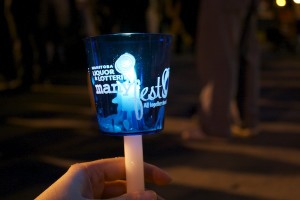 Overall, ManyFest was a fun event and a treat for the senses. The best thing about ManyFest is how the free event brings such a large group together to Winnipeg’s downtown area, which can have a bad rap. I think the Downtown Winnipeg BIZ is doing a great job of trying to revitalize Winnipeg’s downtown area and with events like ManyFest to show that Winnipeg’s centre truly does have a lot of heart.