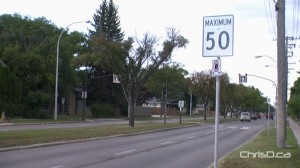 A school zone along Grant Avenue where the posted speed limit is 50 km/h. (CHRISD.CA FILE)

The Manitoba government has given municipalities the green light to put the brakes on speeding in school zones.

Amendments to the Highway Traffic Act allow local governments to set maximum speeds as low as 30 km/h in school zones where the regularly posted speed is less than 80 km/h.

“All families want their children to be safe while crossing streets as they travel to and from school,” said Infrastructure and Transportation Minister Steve Ashton. “The new regulations will permit local governments to establish lower speeds in school zones to ensure greater safety for children in their communities.”

The legislation comes on the heels of a CAA Manitoba awareness campaign to draw attention to drivers speeding and performing other dangerous tasks while driving through school zones.

Municipalities can also set specific dates and hours for the reduced speed limits or have them in effect at all times.

Additional signage to make drivers aware of the posted speed limit must also be placed no less than 100 metres and not more than 250 metres before the zone begins.