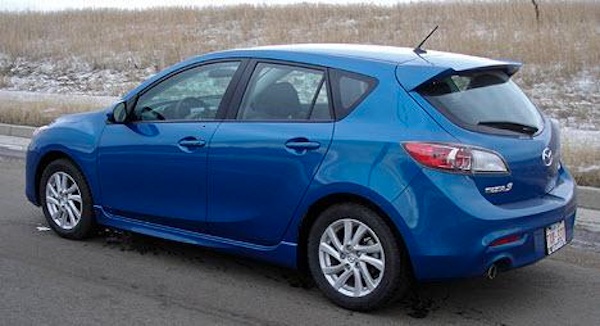 Police are looking for a stolen 2012 Mazda3 GS-Sky with Manitoba plate GTX 310 after a carjacking and robbery that began in Transcona on Sunday, September 15, 2013. (WPS HANDOUT)

A 33-year-old man was robbed of his vehicle on Sunday before the thieves also demanded he withdraw cash from his bank account.

Winnipeg police say the carjacking/robbery began in the area of Kildare Avenue and Winona Street between 3:30 a.m. and 4 a.m.

The man was driving his 2012 Mazda3 westbound on Kildare at the time when two suspects claiming they had a gun forced their way into his vehicle.

An unknown man jumped in front of the vehicle when it approached a stop sign, while another man entered the rear passenger door. The first suspect forced the victim into the passenger seat and took control behind the wheel.

The suspects drove through the south end of the city before stopping in the area of Fermor Boulevard and St. Mary’s Road and demanded cash from the victim.

They later drove to a bank in the 1100 block of Pembina Highway, where the victim was forced to withdraw cash from a bank machine and turn it over. The victim then fled uninjured and waved down a passing vehicle.

The stolen 2012 Mazda3 GS-Sky is blue in colour with Manitoba plate GTX 310. It hasn’t been recovered.

The suspects are described as: