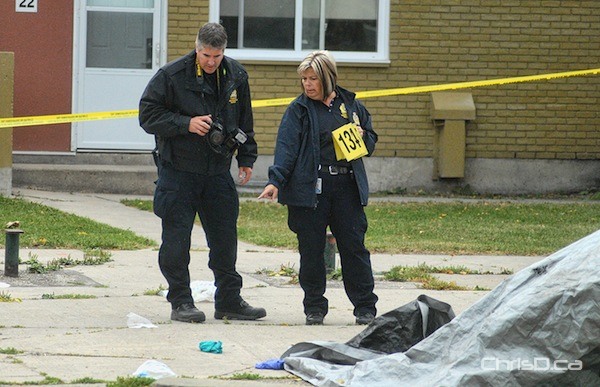 Homicide investigators mark evidence at the scene of an assault that turned deadly in the 100 block of Robinson Street on Friday, September 20, 2013. (STAN MILOSEVIC / CHRISD.CA)

One man has died following an assault at a housing complex early Friday.

Winnipeg police were called to the 100 block of Robinson Street just after 4 a.m. to find two injured men.

Both victims were transported to hospital, where one of the men later succumbed to his injuries. The other victim, 38, remains in stable condition.

UPDATE: Saturday, September 21 — The victim has been identified as Phillepp Rick George Amos, 25, of Winnipeg. The cause of death has been determined to be a result of stab wounds and blunt force trauma.