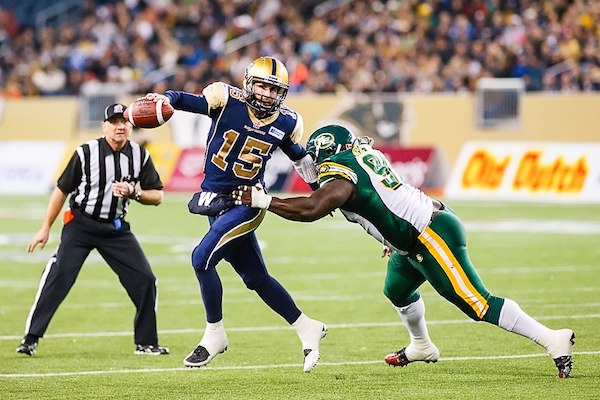 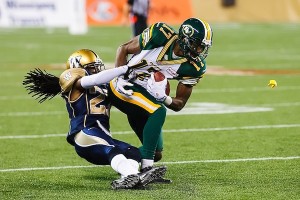 WINNIPEG — In fashion typical of the season thus far, the Winnipeg Blue Bombers let their fans down once again as the Edmonton Eskimos stormed back from a 20-0 deficit to top the home team 35-27 in overtime — a melodramatic late-game finish in front of 28,859 at Investors Group Field.

“I’m disgusted,” said Jovon Johnson amid a completely dejected Bombers locker room. “We were supposed to win that game. No question. But we didn’t, so what are we to do now? Move on.”

In a wild see-saw of garbage-like football between the two worst teams in the CFL, Winnipeg squandered a three point lead with two minutes remaining in regulation and Edmonton punting the ball away.

With starting quarterback Max Hall out with a suspected abdomen injury, Justin Goltz led the Bombers offence to a quick two-and-out, allowing the Eskimos to work from their own 29 yard line with 1:15 remaining.

After Johnson made a huge defensive play on a Mike Reilly deep ball to force third down, Reilly passed again across the middle — but this time the Edmonton offence caught a huge break — and it went off the outstretched hands of defensive back Demond Washington and into the cradle of receiver Fred Stamps‘ arms, where he took it 52 yards deep into Winnipeg territory amidst gasps of the shellshocked crowd.

With Bo Smith in for Alex Suber in the Winnipeg secondary because of cramping, Edmonton attacked the backup defender and set up a 17-yard field goal to tie the game with 26 seconds left.

On their own 30 yard line in the waning moments, Winnipeg head coach Tim Burke decided to take two knees — and not attempt a deep ‘Hail Mary’ pass to set up a potential game-winning field goal — and work for a win in overtime.

“We didn’t have enough confidence in our offence, trying to score in 26 seconds,” said Burke. “I probably shouldn’t even have tried to return the kick. We thought, well maybe if we get a good return on a kickoff that we could parlay that into a field goal, but we mis-played the ball.”

But they ultimately didn’t. In the extra frame Edmonton scored a major with relative ease, while Winnipeg struggled to move the ball at all on their only possession, dropping their record to 2-10 on the season.