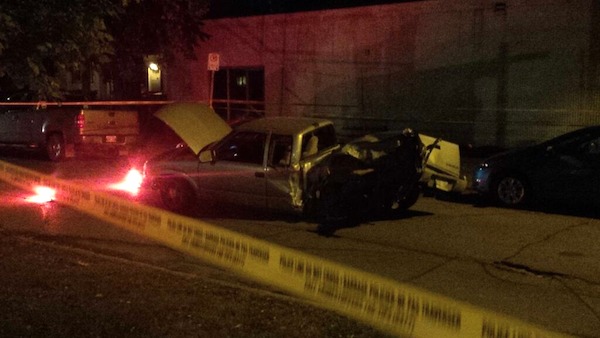 A Chevrolet S-10 sits damaged near Main Street and Magnus Avenue after it was hit by another pickup truck on Friday, September 20, 2013. (SHASTAXOX / TWITTER)

Winnipeg police are considering speed and alcohol to be factors in a crash that injured four people late Friday night.

Police were called to Main Street and Magnus Avenue at around 11:30 p.m. after a Ford F-150 struck another vehicle and proceeded to damage eight others.

Police say the truck hit a Chevrolet S-10 at a high rate of speed after the vehicle turned southbound onto Main from eastbound Aberdeen Avenue. The impact sent the F-150 through a chain link fence, where it rolled over damaging eight other vehicles parked within the lot. Two vehicles parked on the street were also damaged.