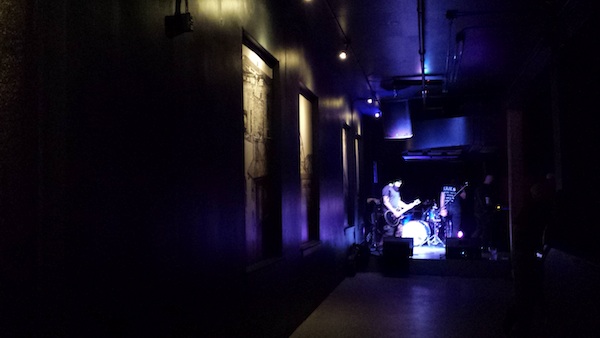 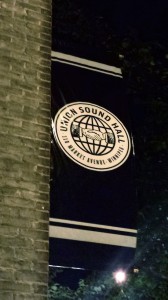 There’s a new place in town that caters to Winnipeg music lovers of all types.

Union Sound Hall is a music venue that opened up earlier this month at 110 Market Avenue in Winnipeg’s historic Exchange District. The place is owned and operated by a group of people who have long been involved in the local music scene, including a couple of the city’s favourite party people, DJ Hunnicutt and DJ Co-op. With the loss of a couple of the city’s favourite music venues the Lo Pub and the Royal Albert in the last year, the venue is filling in a much-needed gap.

I went to check out the place last Saturday when The Creepshow, a high-energy, psychobilly band from Burlington, Ontario took the stage. Union Sound Hall is a multi-room event centre. One room has a 400-person capacity and the other, a 100-person capacity, for a total of accommodating 500 people for larger events with a bar in each room. A quirky, framed painting of a business man wearing vintage eyeglasses watches over the main bar. Most of the venue has black painted walls as well as a brick wall — a characteristic of so many historical buildings in the exchange, separating the two rooms. Large black and white photo prints are displayed on one side of the wall that highlight some of Winnipeg’s historic architecture. 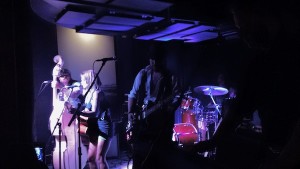 The vibe of the place reminds me of a favourite venue of mine, The Pyramid Cabaret on Fort Street. Like The Pyramid, Union Sound Hall seems to be all-encompassing when it comes to the live music it showcases. It caters to the hip-hop, rock, and dance scene with equal zeal and refuses to fall under any sort of label. The bottom-line of the place is to aim for its patrons to have a good time and it seems to be doing a good job of that.

According to Union Sound Hall’s website, they couldn’t decide on a slogan to represent the place. But if they did have a slogan, they would have chosen, “Music for all, by all.” I think this sums them up perfectly as the place seems to prides itself on being a music venue where any type of music can be heard and anyone can feel welcome to be a part of.