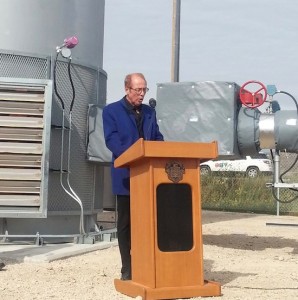 Mayor Sam Katz speaks during the opening of a new system at Brady Road Landfill to reduce greenhouse gas emissions on Monday, September 23, 2013. (OFFICE OF THE MAYOR / TWITTER)

New equipment at Brady Road Landfill will cut down on the amount of greenhouse gas emissions being generated at the garbage site.

The methane and greenhouse gas collection system will capture and treat landfill gases, which are produced when organic waste decomposes. Methane gas is 21 times more potent than carbon dioxide.

The province contributed $2.5 million to the project, while the city’s share was $4.5 million. The city was obligated to construct the system — first announced in 2002 — under the Climate Change Emissions Reduction Act.

“Our goal is to not only recover the gas from the landfill but to be able to use it in the future for building heat or electrical generation,” Mayor Sam Katz said.