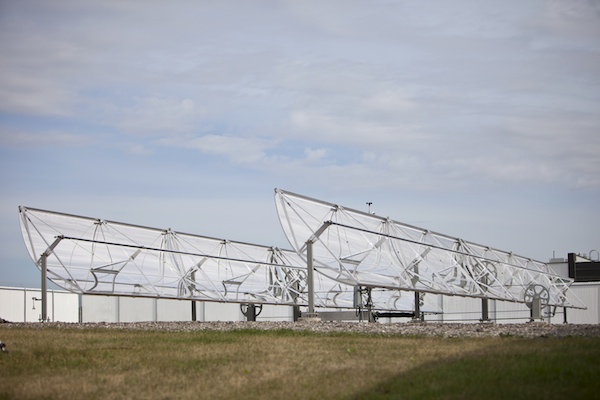 A parabolic solar trough system at Red River College’s Notre Dame campus is being tested as part of a year-long pilot project. (HANDOUT) 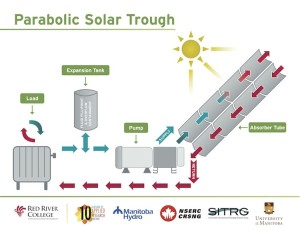 A diagram of the parabolic solar trough being tested at Red River College. Click to enlarge. (HANDOUT)

Red River College is testing a new solar trough system that could one day heat households across Manitoba.

RRC has partnered with the University of Manitoba and Manitoba Hydro to develop a solar thermal parabolic system on the northwest end of its Notre Dame campus.

“This project will test the trough’s performance in Manitoba’s climate, and we intend on using the results to estimate Manitoba’s solar thermal resource,” said Dale Friesen, division manager, Industrial and Commercial Solutions for Manitoba Hydro. “These troughs could potentially be used to lower the province’s use of electricity and natural gas for heating purposes.”

The system captures and concentrates solar energy into a fluid-filled tube where heat production is measured. Similar troughs have been used in warmer climates to generate electricity, but given Manitoba’s shorter winter daylight hours, it will be more beneficial to use the system for heating and cooling purposes.

The year-long pilot project is costing about $400,000, including funding from the Natural Sciences and Engineering Research Council of Canada (NSERC).