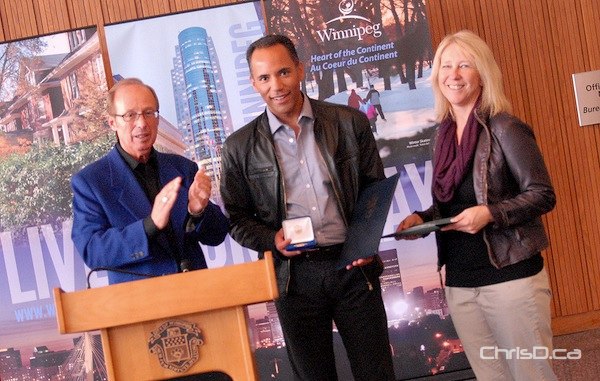 Fresh off his win on “The Amazing Race Canada” last week, Tim Hague Sr. was back in Winnipeg on Monday.

Hague met with Mayor Sam Katz at City Hall to receive a medal for outstanding achievement for winning the reality TV show. Hague won the cross-Canada race with his son, Tim Hague Jr.

“Tim and Tim faced adversity throughout the competition and met all of their challenges with a tremendous amount of spirit and determination,” Katz said. “We couldn’t have asked for a better team to represent the city, and I am sure all Winnipeggers join me in congratulating them on this great achievement.”

Katz also presented Tim Sr. with a City of Winnipeg flag, a nod to the flag challenge in the final episode, which ultimately clinched the win for the Winnipeggers.

Auditions for the second season of the show will begin later this fall.