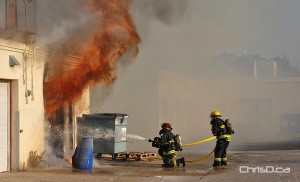 Winnipeg firefighters and the union that represents them have come to an agreement surrounding overtime.

The United Fire Fighters of Winnipeg previously lashed out at the city’s acting fire chief, Bill Clark, for encouraging firefighters to take less overtime in an effort to cut department costs. UFFW president Alex Forrest said that would end up putting public safety at risk with not enough available firefighters on call to handle emergency situations.

“We are pleased to announce that, after extensive discussions, the union and the department are committed to working together to minimize overtime without compromising public safety, firefighter safety or our ability to serve the public in responding to fire and EMS emergencies,” Forrest said in a statement.

The union says strategies will be implemented over the next two months in dealing with the overtime costs associated with maintaining a safe level of firefighter staffing.

It was also announced Wednesday that Winnipeg Fire Paramedic Chief Reid Douglas is no longer a city employee after more than 35 years with the department.